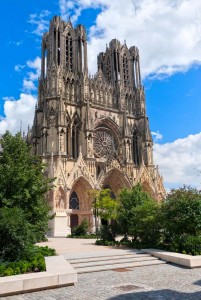 Though most are most familiar with Notre Dame Cathedral in Paris, the Cathedral of Notre Dame de Reims is a no less amazing, historic and popular attractions in France today. Built over 800 years ago for Saint Remi, the bishop of Reims, this massive cathedral hosted over 500,000 visitors alone in one year and is considered one of the most popular destinations in all of the Champagne region today.

Considered a Gothic masterpiece, this UNESCO World Heritage Site, has seen centuries come and go and kings of France crowned for generations. Known as a harmonious marriage of sculptural decoration and architecture, its former abbey still contains its 9th century nave, within which lie the remains of the structures namesake, Archbishop St Remi.

The history of this cathedral includes some of Frances “most crowning” moments so to speak. Site of 25 coronations ranging from Louis VIII in 1223 to Charles X in 1825, it is also known that Joan of Arc visited here fro the crowing in Charles VII in 1429.Built to replace a cathedral destroyed by fire in the same location, the construction of this masterpiece took around 80 years.

The city of Reims itself is a city with roots dating back to 498 AD when Clovis was baptized as the first Catholic sovereign. Reims history became even more interesting when in WWI, more than 80% of the city was destroyed. At that time, the Cathedral had sustained damage however, Rockefeller and Carnegie stepped in and financed the rebuilding of the roof of the cathedral.

The region is still popular today as the premier destinations for wine making and home to many of the most famous cellars in the world today. Though last year was the cathedrals 800th anniversary which was greatly celebrated, a visit to the cathedral today remains no less popular than ever before. Light show or no, this is one cathedral which should be on every bucket list.